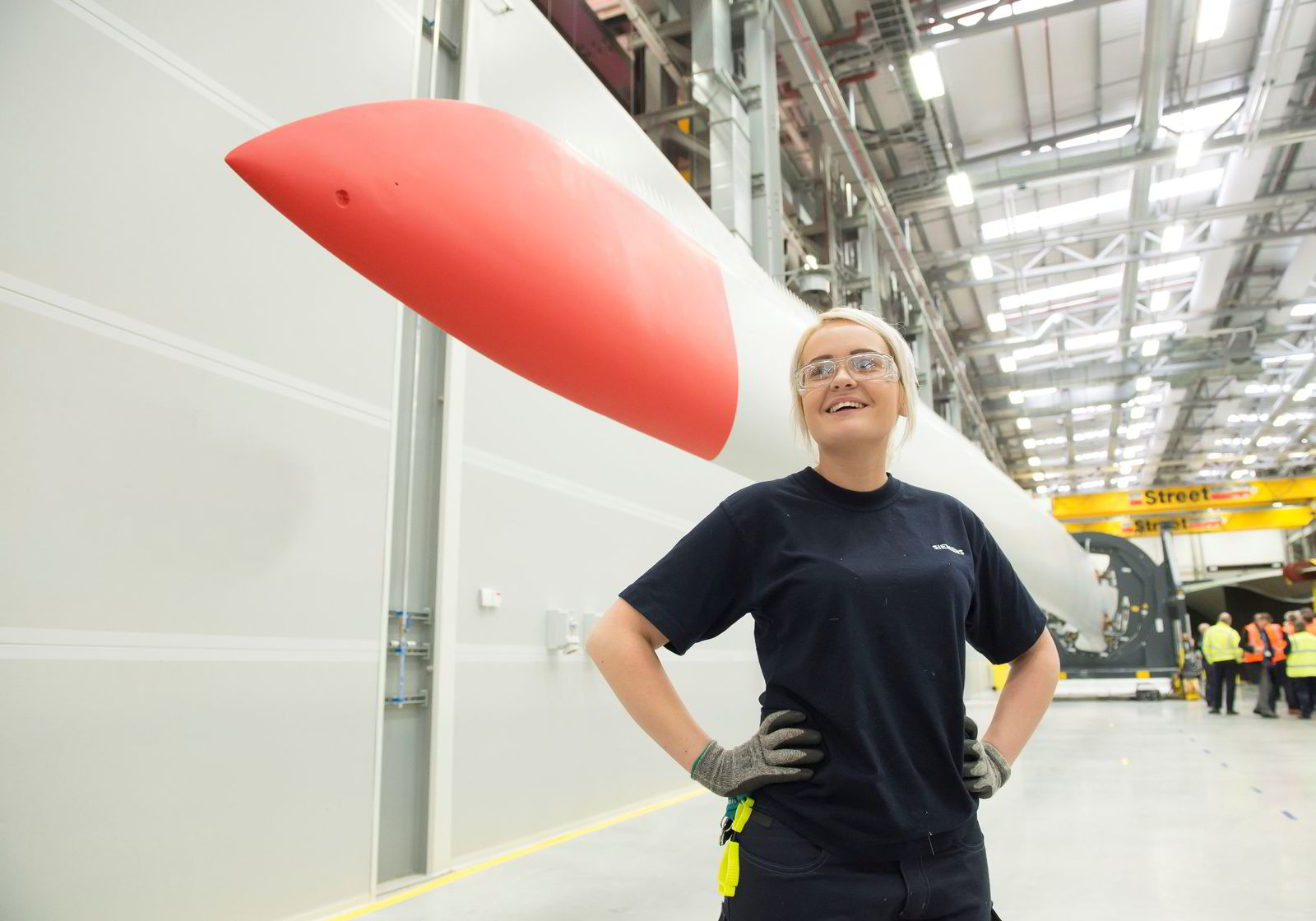 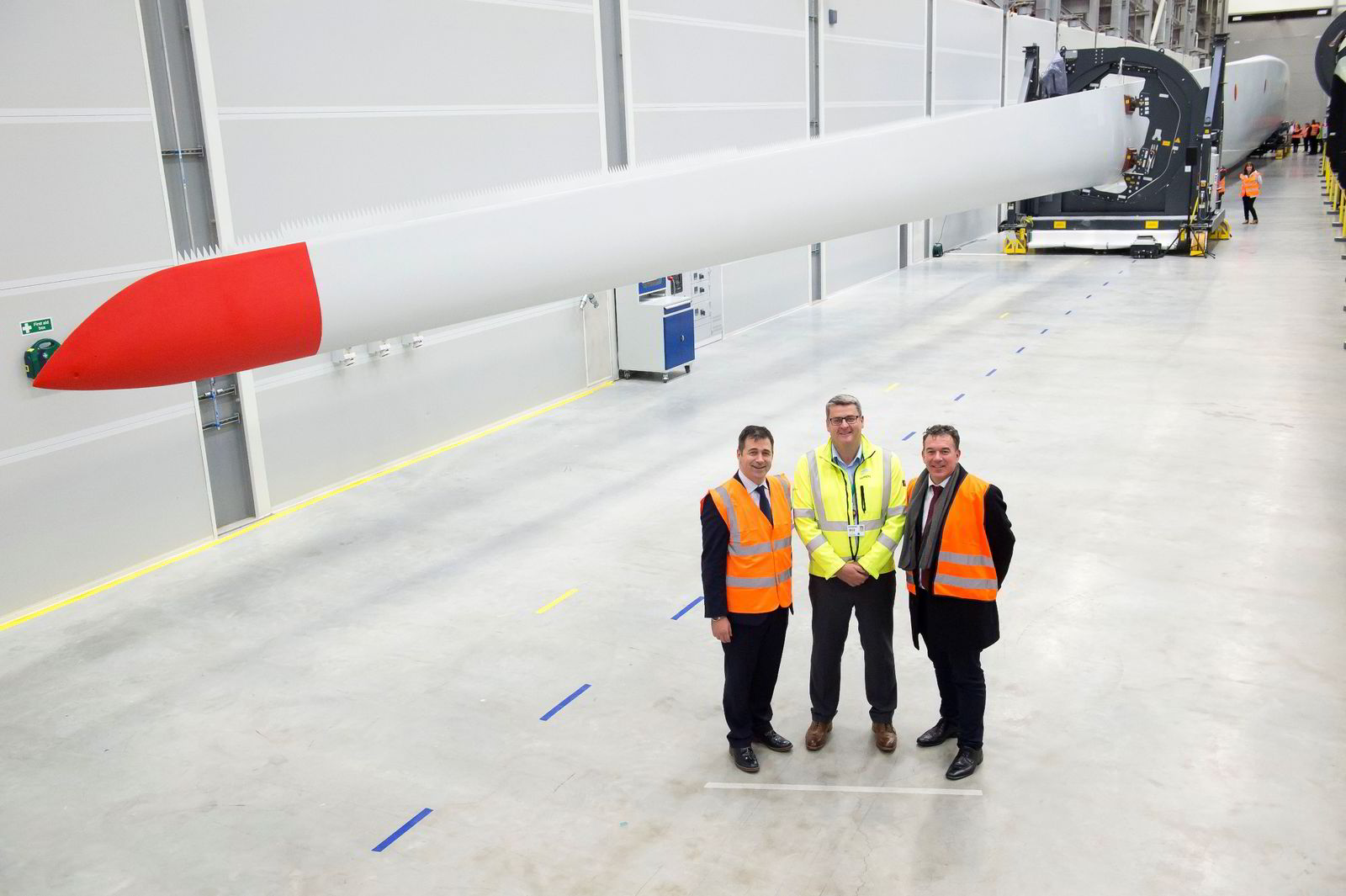 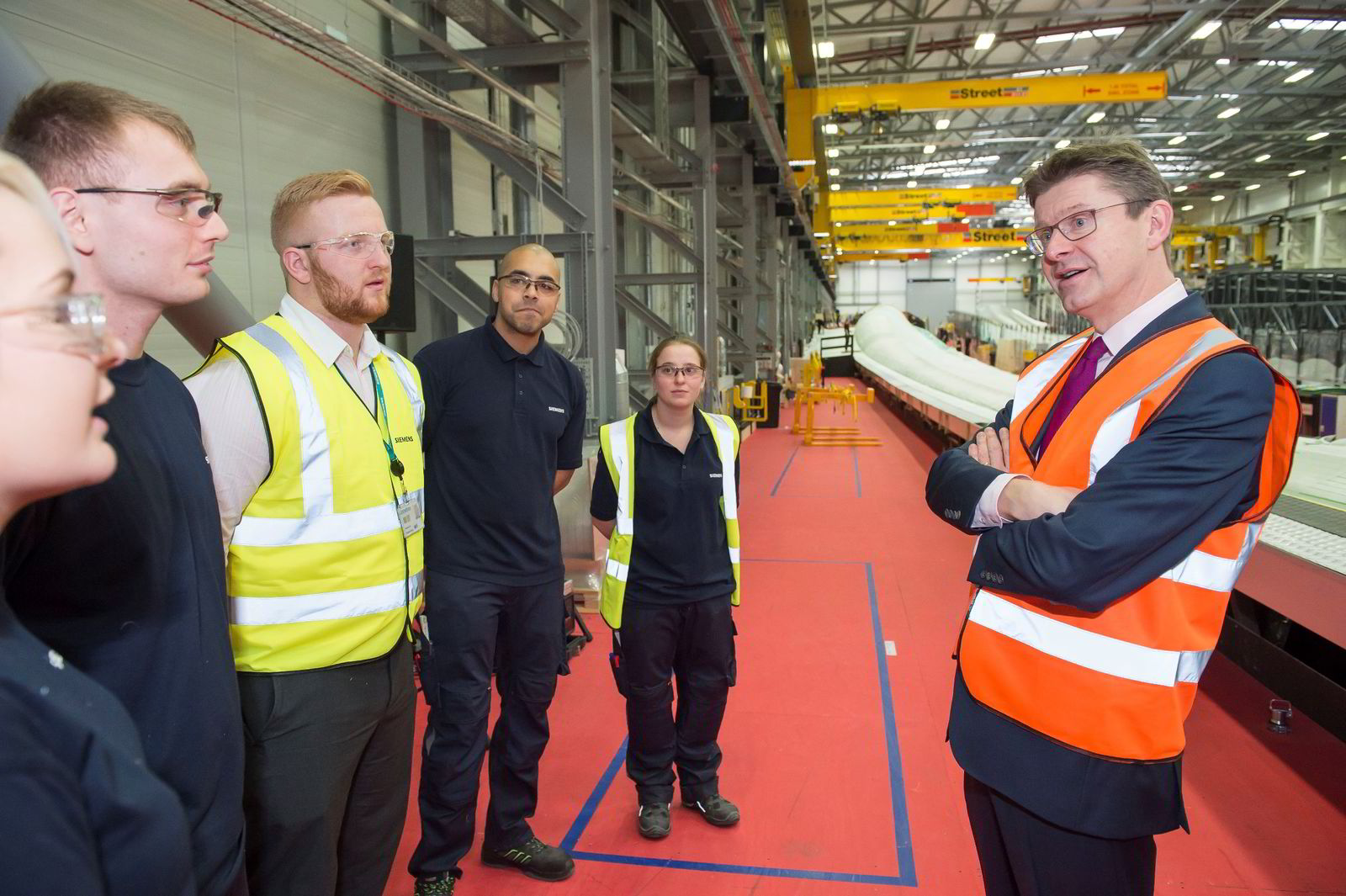 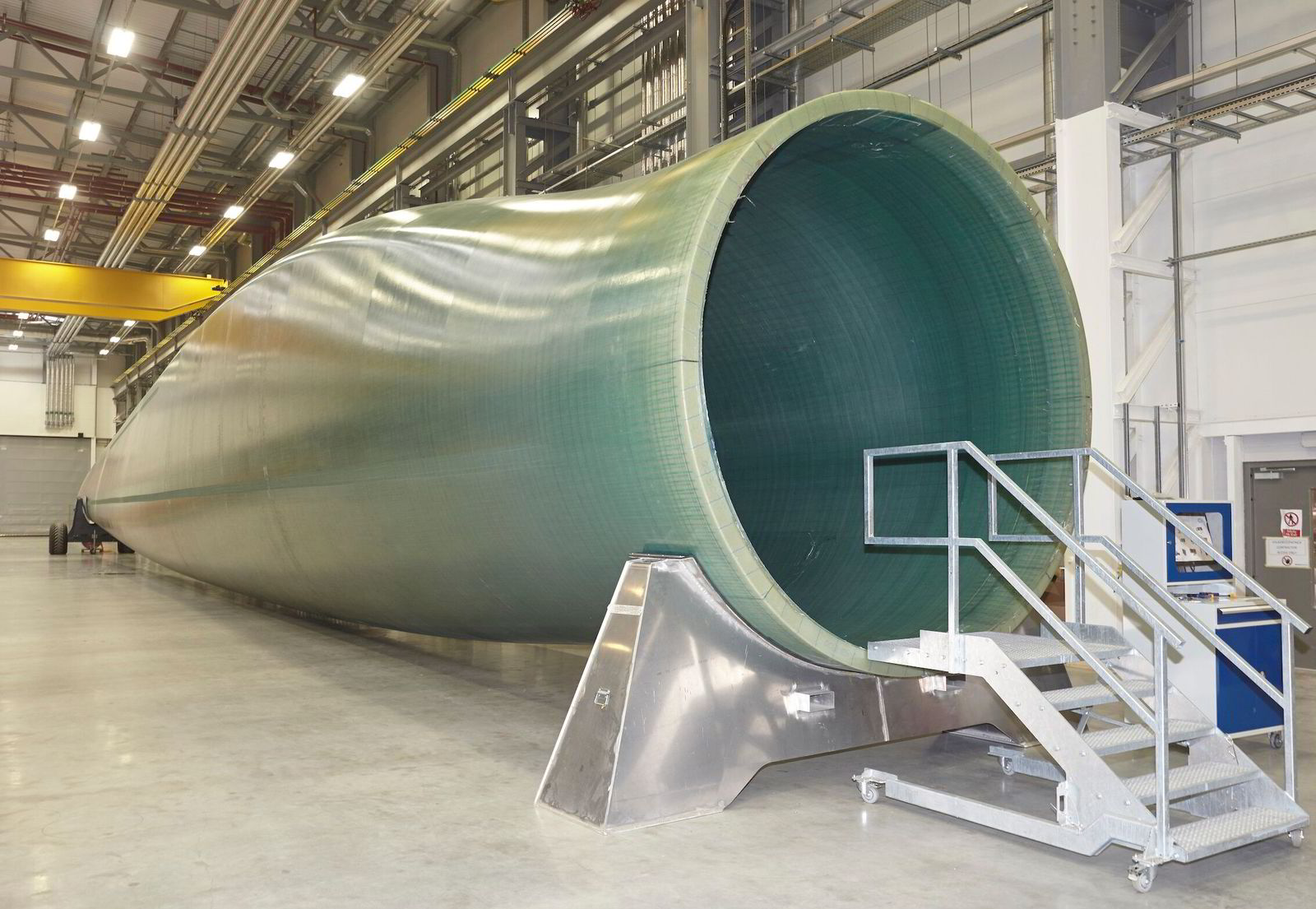 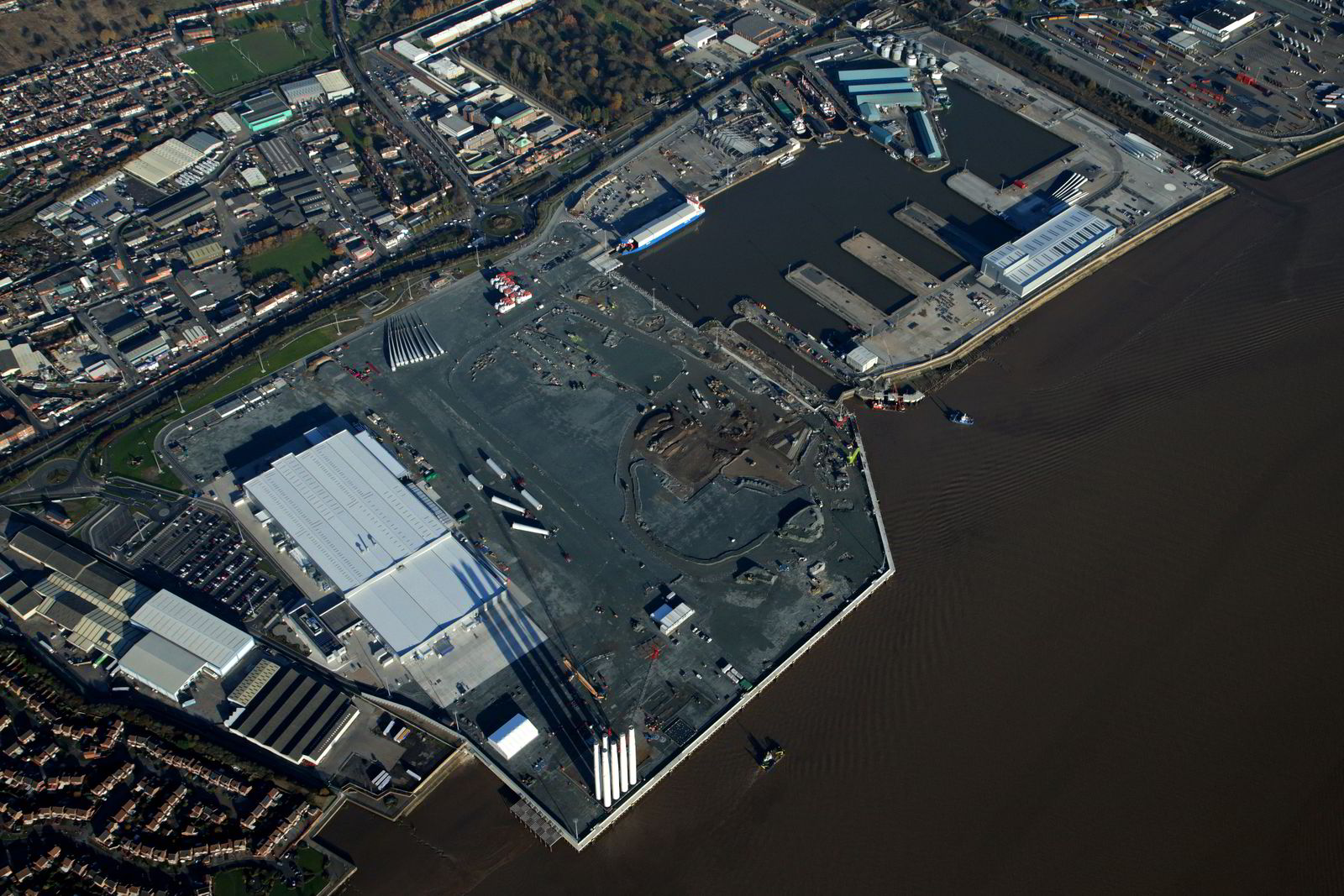 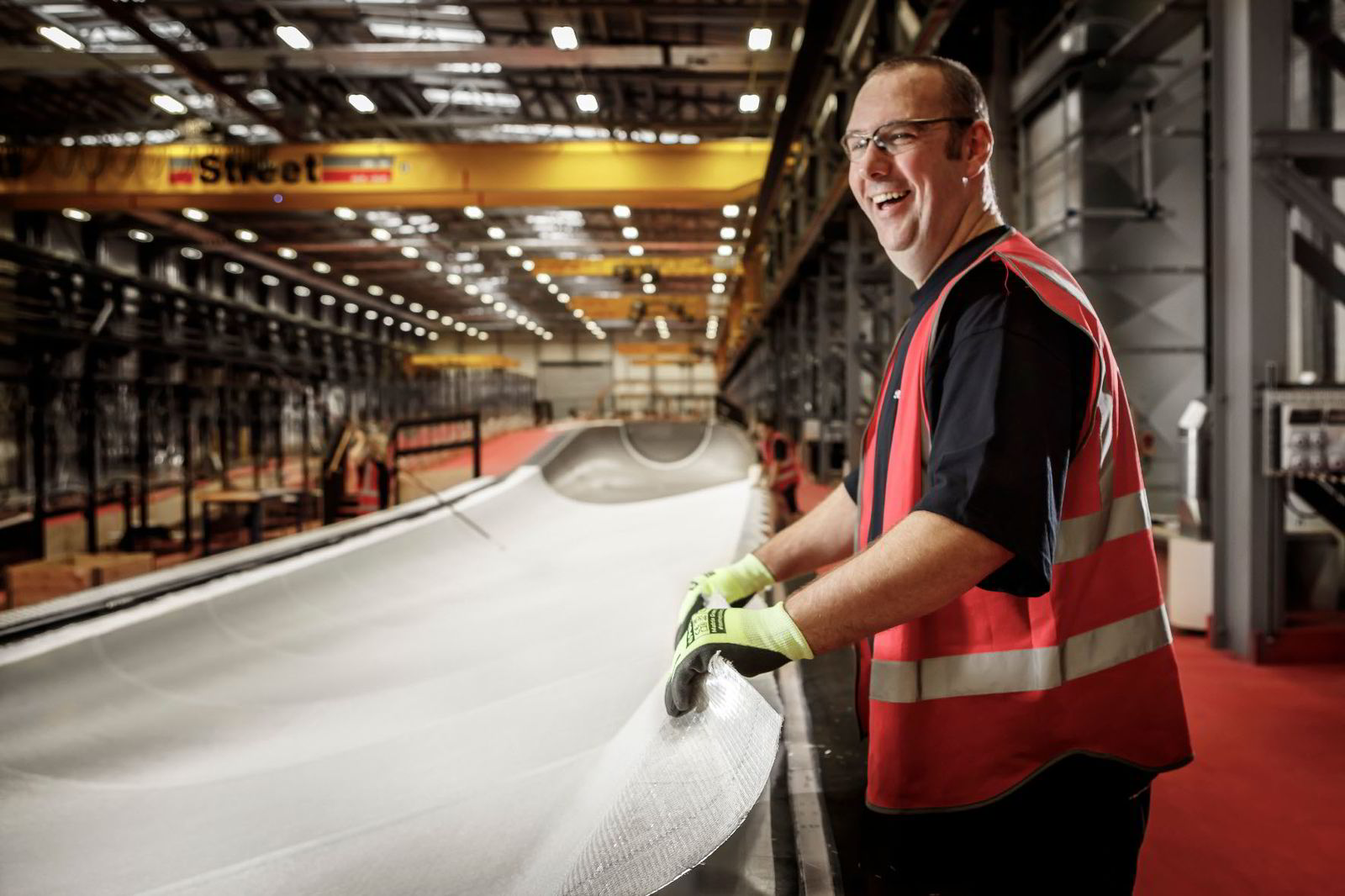 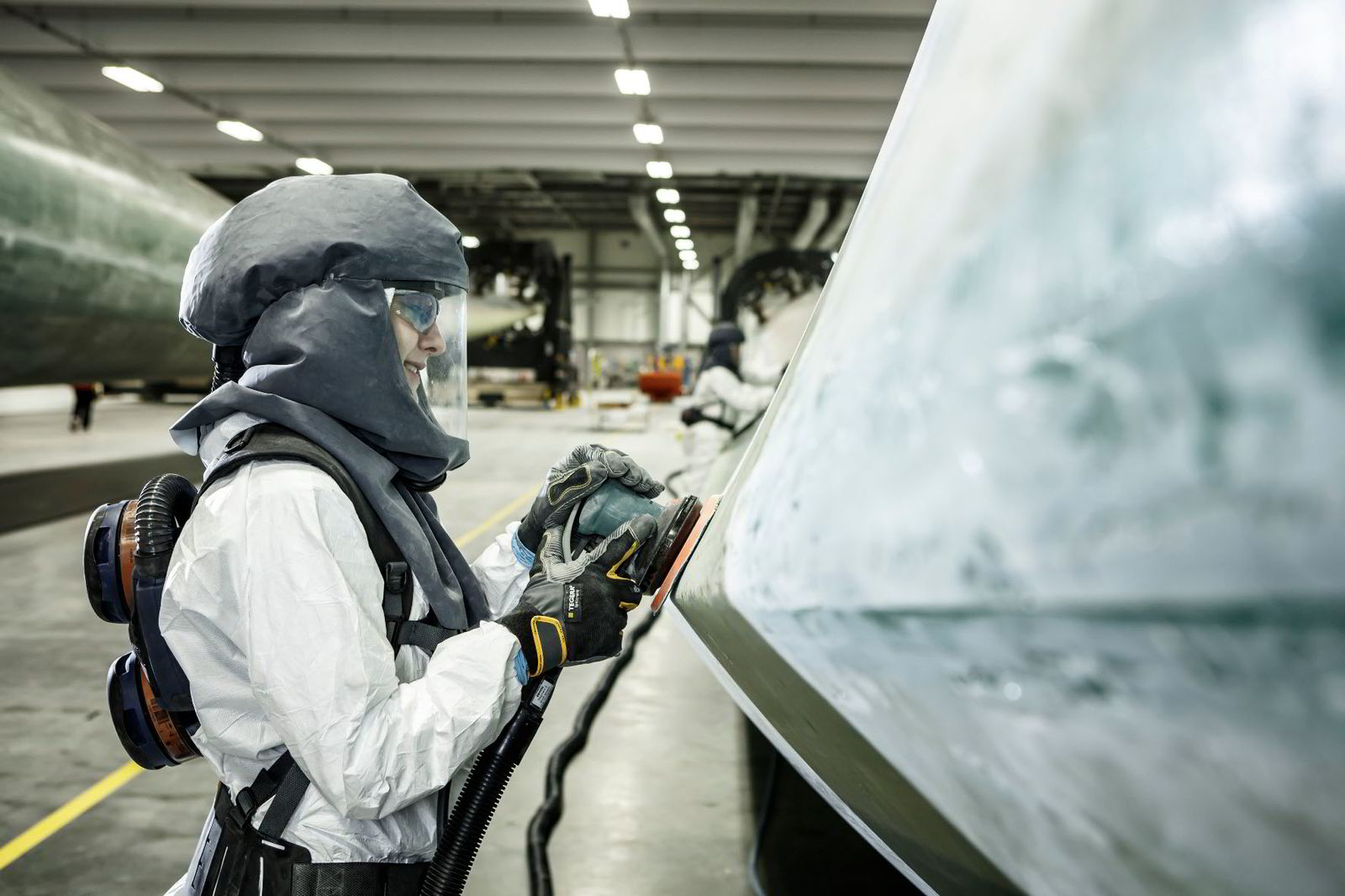 The first 75-metre blade to be manufactured at Siemens' new £310m ($389m) wind equipment plant was unveiled at the official opening of the facility in Hull, northeast England.

The blade – the first of hundreds to be manufactured in Hull every year for Siemens’ 7MW and 8MW turbines – will be among the first supplied to Denmark’s Dong Energy for its Race Bank wind farm, located off Norfolk further down the east coast of England.

Siemens said this week's milestone comes less than two years after a ground-breaking ceremony to mark the start of construction at the 540,000 square metre site at Hull’s Alexandra Dock.

Since then Siemens and partner Associated British Ports have transformed the under-utilised waterfront location into a major hub for wind power manufacturing, logistics and assembly, which will employ 1,000 people when fully operational.

Guests viewed the new factory, and 90-metre turbine towers which have been assembled at the dockside, ready for load-out with other components early in January for the Dudgeon wind farm off the Norfolk coast – the first project to be serviced by the new facilities in Hull.  Dudgeon is owned by a Statoil, Statkraft, and Masdar joint venture.

“This is exactly the relationship we want to see between our large infrastructure projects in the UK and our supply chain companies as part of our industrial strategy,” said UK energy secretary Greg Clark, visiting the factory.

“Hull has established itself as an important manufacturing and engineering centre for this innovative and exciting new industry.  In the coming years the new offshore wind projects that this factory will supply could generate enough clean electricity to power over three million homes and businesses.

“Since 2010, there has been over £52bn of investment in renewables in the UK – creating thousands of highly skilled jobs and opportunities here in the UK to support our low-carbon economy.”

Siemens UK chief executive Juergen Maier said: “We are witnessing probably the best example of industrial strategy in action we have in the UK today – creating new, local, skilled jobs, sustainable growth and the latest renewable technology, benefiting the UK economy and our society.”

Maier said energy policy should be at the heart of the UK’s industrial strategy.  “One of the greatest challenges we have is to increase productivity in the UK and generate growth while decarbonising our energy supply and reducing emissions to achieve a sustainable energy mix.

“Most of all this new factory signals a positive future for manufacturing in this country.  This is a world-class facility – innovative, productive and competitive – that generates real value for the local community and the UK economy.”

“Offshore wind developers are committed to maximising the amount of locally-made kit in their projects, to ensure that we all reap the economic benefits of renewable energy – including opportunities to export, capitalising on the UK’s global lead in offshore wind.

“The offshore wind industry is bringing well over £20bn in investment to the UK over the course of this decade, creating thousands of new jobs, from apprentices taking their first steps into high-tech, to experienced workers making the transition from the oil and gas sector into renewables.”

However, Greenpeace warned that the government needed to send a strong signal that the UK “is open for business and is still an attractive investment environment for cutting edge renewable technologies and infrastructure, such as offshore wind or solar, and battery storage”.

“The UK has the potential to become a world leader in manufacturing, design and services of offshore wind projects,” said Doug Parr, Greenpeace chief scientist. “This will create jobs and investment in the UK and should be part of the government’s upcoming Green Paper on industrial strategy.”

Development of the full Alexandra Dock site, including completion of a new harbour for pre-assembly and load out of wind turbine components, will continue into 2017.

Email this to a friend

The first 75-metre blade to be manufactured at Siemens' new £310m ($389m) wind equipment plant was unveiled at the official opening of the facility in Hull, northeast England. The blade – the first of hundreds to be manufactured in Hull every year for Siemens’ 7MW and 8MW turbines – will be among t...