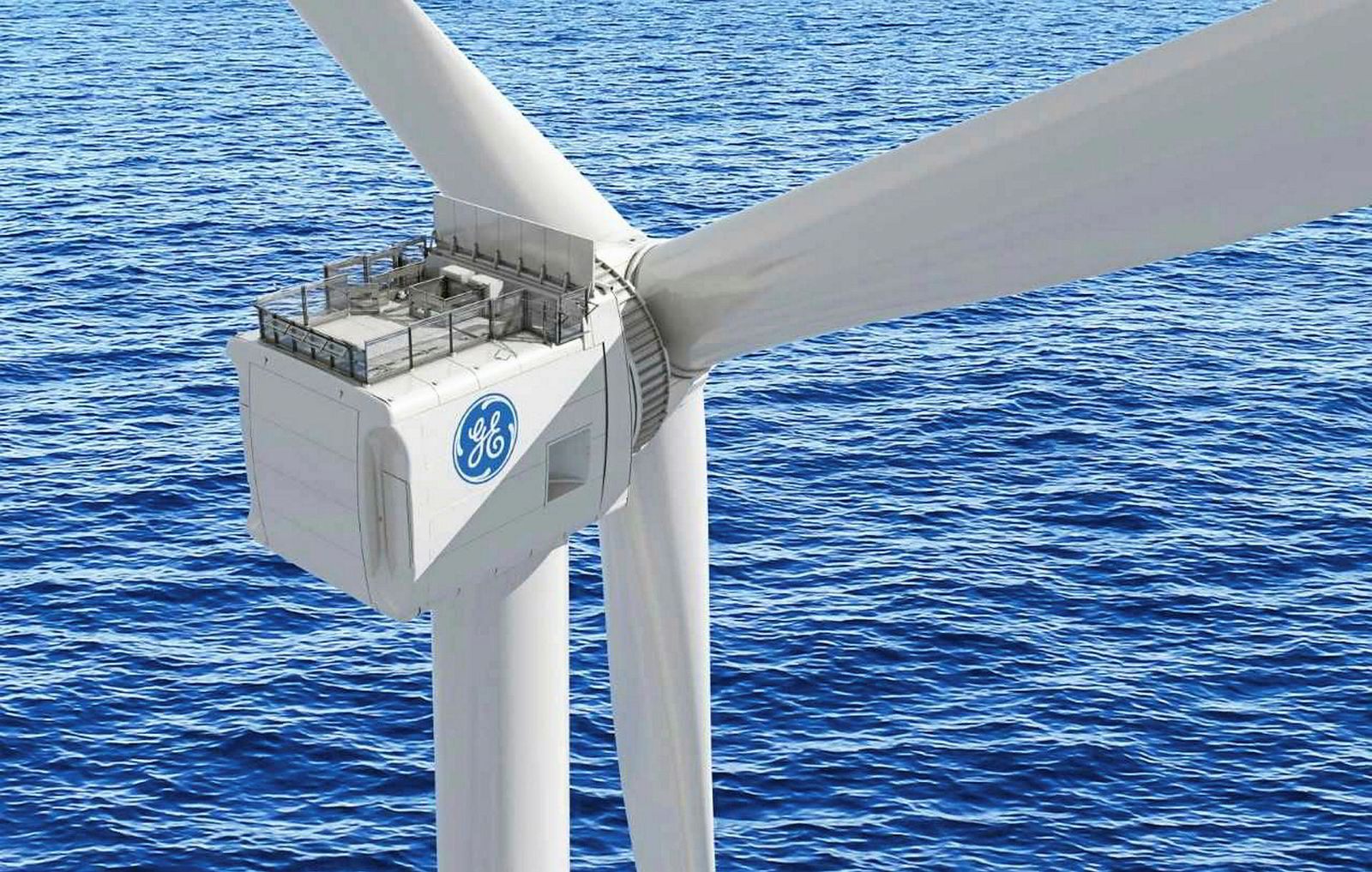 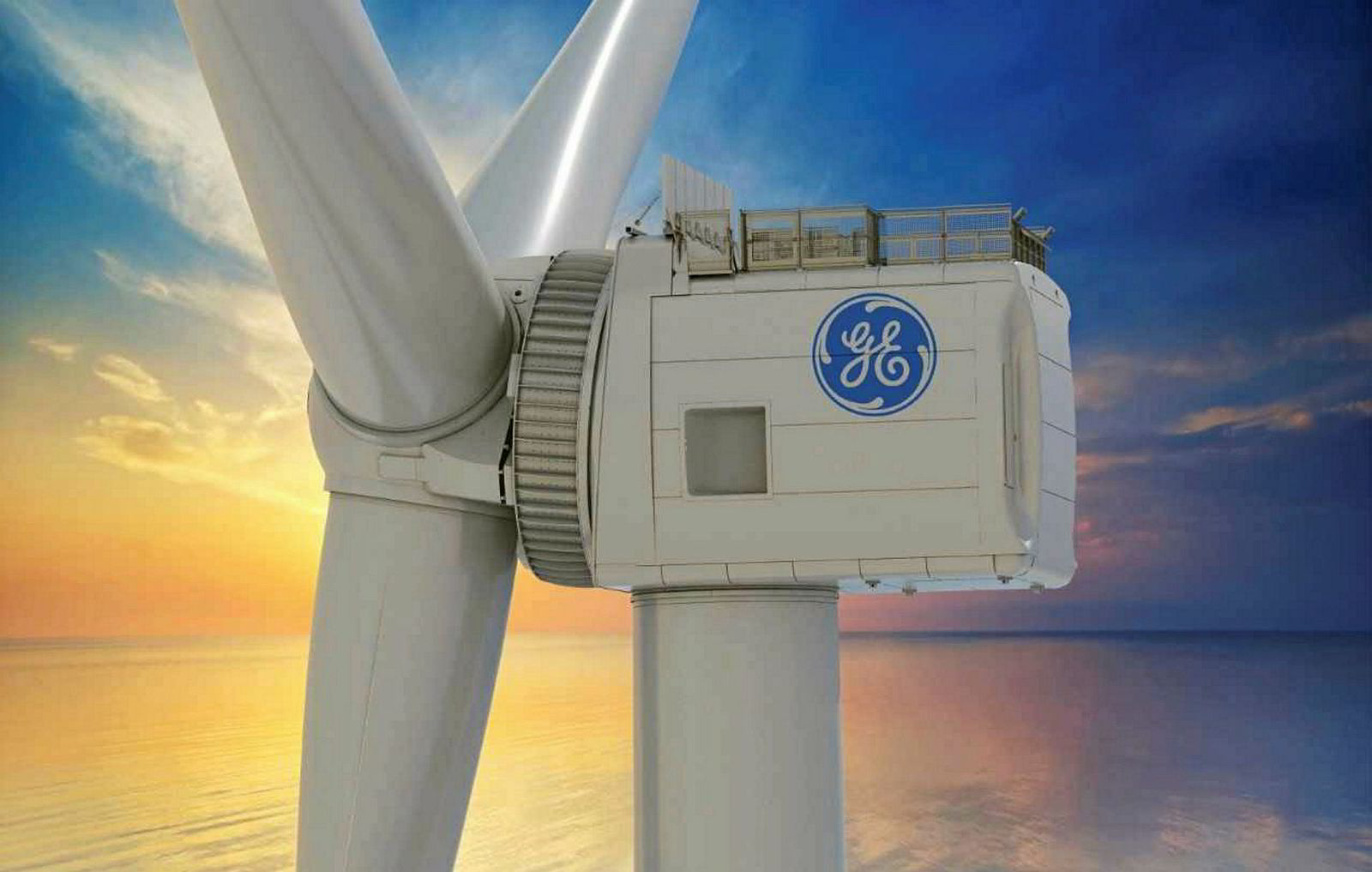 IN DEPTH | Haliade-X design, first of which are slated to ship in 2021, promises to generate 45% more power than current best-in-class offshore machines

GE has unveiled its long-rumoured next-generation offshore wind turbine design, a 12MW monster that will churn out 67GWh of power a year – 45% more than current best-in-class machines – and take the wider offshore wind industry toward the next level of industrialisation as a first model fit for the zero-subsidy European plants of the 2020s.

The Haliade-X, launched by the US company with Parisian flourish as having a rotor-star “five times the size of the Arc de Triomphe”, will fly LM Wind Power’s lengthiest blade to-date, a hyper-long 107-metre model that eclipses the sector’s current record-setters by almost 20 metres.

Each machine will produce enough electricity for 16,000 European households, with a 750MW wind farm able to supply one million homes. First nacelles are expected to be complete in time for demonstration next year and lead-off bids with the turbine, which went in “two weeks ago”, could result in flagship orders being shipped out in 2021.

“We want to lead in the technologies that are driving the global energy transition,” said GE chief executive John Flannery, in a statement sent to Recharge in advance of the official launch. “Offshore wind is one of those technologies and we will bring the full resources of GE to make the Haliade-X programme successful for our customers.”

GE Renewable Energy chief executive Jérôme Pécresse, speaking to Recharge, called the launch of the Haliade-X “a decisive step deeper into the offshore wind segment that leap-frogs what exists in the market today”.

And 12MW is not the end, it is the beginning. We will go bigger.

The Haliade-X has the capacity to take the ultra-large turbine to its next incarnation, in scale and efficiency. The design, which is “based on core technology from Alstom [bought by GE in 2015]” for the 6MW, features a 220-metre-diameter rotor turning a hulking, digitally-controlled direct-drive and permanent-magnet-generator transmission system with a 63% gross capacity factor, “five to seven times” above the current industry benchmark.

“There are a number of merits associated with offshore wind. One of the beauties is that you build very large-scale projects – 500MW to 1GW per development, being very significant in the number of homes you power. And, of course, you can harness winds that are stronger, more regular and so on,” said Pécresse.

“We have seen the prices of offshore wind come down and down in the northern seas which has led to zero-subsidy tenders: this means European utilities are already banking on this kind of ultra-large turbine [that has levelled cost of energy economics] to make [these wind farms] economic.

“And 12MW is not the end, it is the beginning. We will go bigger. But this model will be an important step in making offshore wind cheaper in Europe today, the US tomorrow … and in China in a few years’ time when it moves to [machines of] 10MW-plus.”

The conception and construction of the Haliade-X platform has been founded on a cross-portfolio approach at GE, with GE Renewable Energy engaging in “unprecedented collaboration” within the group, including GE’s Onshore wind team, which has a fleet of 50,000 turbines in the field; blade expertise from recent acquisition LM Wind Power; GE Power and GE Aviation engineers undertaking peer reviews of design; GE’s Global Research Center checking control systems and component validation; and GE Digital supporting digital modelling, analytics and app development.

GE plans to invest $400m over the “next three to five years” to fund the Haliade-X’s engineering, testing and supply chain development. Construction of the nacelles will be handled by GE’s St Nazaire, France, factory, which is being retrofitted to handle components for the 6MW model, while the LM blade plant being completed in Cherbourg to produce its 88.4-metre design will be tooled to accommodate the 107-metre version.

The advent of this machine in Europe, where MHI Vestas and Siemens Gamesa have largely divided the spoils with their respective ultra-large offshore turbines will “increase competition, which is a good thing for the market”. Pécresse expects the US offshore build-out to be “particularly helped” by the arrival of 12MW machine. “This turbine is meaningful for Europe and equally meaningful for the US,” he said.

“At [Deepwater Wind’s 30MW] Block Island [demonstrator] I think we did some very positive steps [to advance US offshore wind]. People see the wind farm is working – we are operating it at 97-98% availability, the people on the island have cheaper electricity, and there was recent report that showed the impact on the lobster and sea fauna is positive.

“A bigger, more efficient turbine that produces cheaper electricity, I think will help with the acceptability of offshore wind [in the US].”

The scale-up of turbine design in recent years has been one of Olympian ambition in the offshore wind industry, with models having grown from nameplate capacities of 3-4MW to the current 6-8MW workhorses in the span of five years. But for the wind farms that are being developed to be brought online off Europe without subsidy, from 2022, it is expected that 13-15MW turbines will be needed for economic viability.

MHI Vestas’s V164, which started life in 2011 as a 7MW design, has evolved into an up-to-9.5MW machine, which can be souped-up with power electronics to a better than 10MW rating. Siemens Gamesa’s SWT-154 has been steadily sold with ever-higher nameplates, starting off at 6MW and climbing to over 8MW, and the OEM has a long-running ‘1X’ development programme for a 10MW+ model.

Senvion, which has a 6.2MW model as its largest in production, has disclosed that it is aiming to have a 10MW-plus offshore machine ready for market in the 2020s.

GE’s 6MW Haliade, installed for the first time in 2014 off Belgium, has been sold into developments including the first US offshore wind array, Block Island, the Fujian Xinghua Gulf demonstrator off China, and, most recently, the Merkur wind farm off Germany.

With two floating wind projects in the frame for its 6MW Haliade off France and scouting “ongoing [in the] obvious markets, Japan etcetera”, Pécresse sees “a good fit” for its 12MW machine in this fast-emerging market.

“We believe in floating. That is why we are working on these pilot projects before launching full-scale commercial bids.”

As late as last May, the company would only say that “like everybody” it was considering launching a larger offshore turbine than the 6MW unit but rejected the idea it had at that point made a formal decision on the matter.

For the wind farms that are being developed to be brought online off Europe without subsidy, from 2022, it is expected that 13-15MW turbines will be needed for economic viability.

“There was some scepticism a few years ago as to whether offshore [wind] was going to be a market,” added Pécresse. “Now there is no doubt. We want to play in this global market, everywhere we can, with [the Haliade-X] platform.”